Time for the first triathlon of the year, baby!

A couple Sundays ago on May 11 I did my first triathlon of the season, the Coffman YMCA Triathlon, a sprint distance race.  This race wasn’t about setting records or PRs, but about setting a baseline for the year to work from.  I was so excited to get out and start racing again.

To set the stage for the for the race, it’s necessary to understand that back in Jan/Feb I picked up a running injury that curtailed all running until recently.  The chiropractor said it was an IT Band issue, but I talked to my doc, and he thought it was a lateral collateral ligament issue.  I side with the doc.  Anyhow, the upshot is that I had been swimming and cycling (well, kinda, I picked up an injury in April that affected that, too), but not running.

One more thing.  I tried to talk a few friends into coming to the race, but who wants to go watch someone else race at 7:30 on a Sunday morning?  The answer: only two dedicated friends. 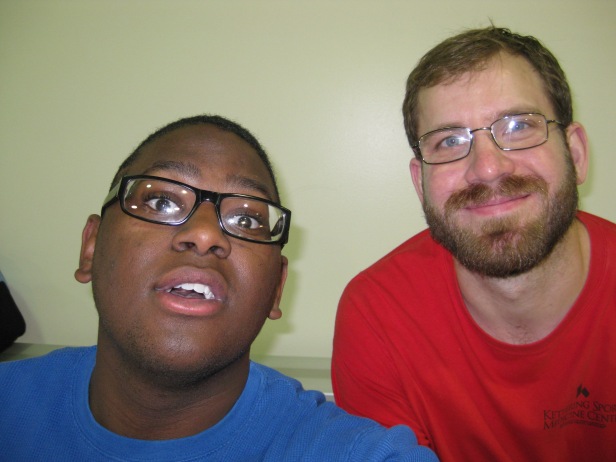 I rolled in to the YMCA at 6:30, an hour before the race. I checked in, got my shirt, and then went to rack my bike. This event at the YMCA only had about 100 people signed up, so I was wondering who was going to be there (in other words, I was going to judge the seriousness of the competitors by their bikes). Yep, there were about eight serious-looking TT bikes, so I figured placing near the top was a no-go. In addition to this, the night before, I reviewed the participant list and saw that my former coach signed up a couple days previous. My bet was definitely on him to take the race. 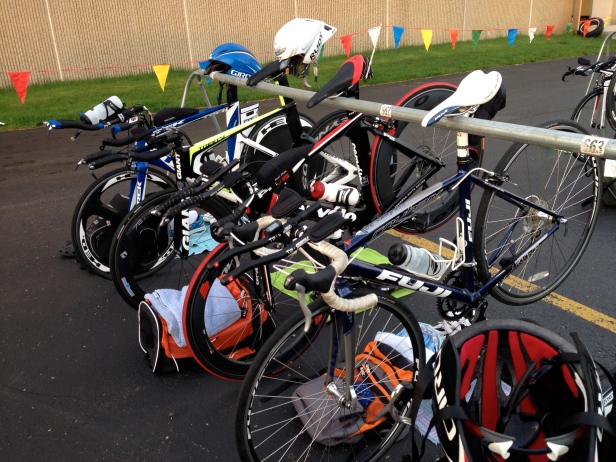 You can see my Fuji road bike next to bikes that might make it feel a bit self-conscious.

The swim was a pool swim, so therefore we would swim a 50, and then duck under the lane lines and swim the next 50, snaking our way through the pool.  After setting up transition, I headed down to the pool, and about 15 minutes before the start did 200y to get loosened up. 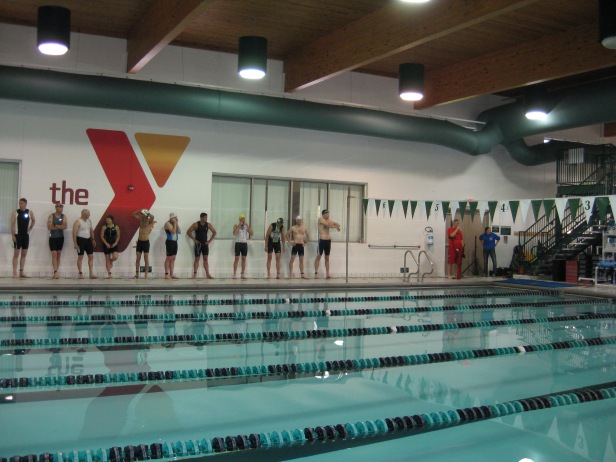 They closed the pool shortly after. All the athletes lined up based on estimated swim time. I was 13 (and then 14th) in line. As everyone was standing in line, they called out numbers based on starting spot, and I was the last one they called! I scored a gift card to Foot Locker.

The race started with people dropping in every 6-10 seconds. I swam the first 100 pretty quick, and then realized there wasn’t a need to. In 300y, I wasn’t going to gain or lose significant time on anyone. Those in front of me weren’t too far, but I wasn’t going to catch them, and I had about a whole length until the person behind me. Snaking through the lanes is interesting. I had practiced doing flip turns under lain lines at masters the week before, but it is so odd to be pushing off at an angle. I had a couple friends with me, and as I swam in front of the bleachers, I flashed a thumbs up, but didn’t hold it long enough for them to get a picture. 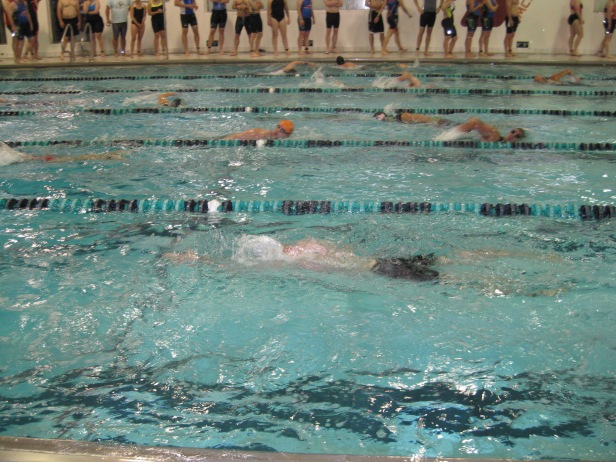 I probably averaged 1:30/100y or a little under since the swim time included the run to transition.

For starters, this was NOT a 10.5 mile bike. My Garmin had it at 11.8. So I ultimately averaged 19.5 mph, which isn’t bad for me for a first race of the season after some injury issues. The course was an out and (almost) back x2.  I could tell the distance was off, because the turn around didn’t happen until close to six miles.I spent the race leapfrogging with a teenager. I would catch him on the hills, hold him off on the flats, and he would catch me on the downhills. Multiple times. I recognized him from the swim, where he started a couple places ahead of me.About three miles from the start, and again on the second lap, there was a hill over a half mile that gained around 100 ft. It was definitely something of a grind. As I passed the poor folks on mountain bikes, I could tell they were regretting their bike choice. It only takes one race to figure out what kind of bike you need. Heading up the hill, my old coach was already coming down. You could tell he was smoking it. I finished the bike leg feeling pretty good. I didn’t push myself too hard, and it will give me a good platform to move forward from.  I should be able to do some work and average over 20 mph for upcoming races.

As I headed out of transition I didn’t really know what to expect.  I had not been able to do much running, so I was hoping for the best, and expecting a 24 minute 5K. 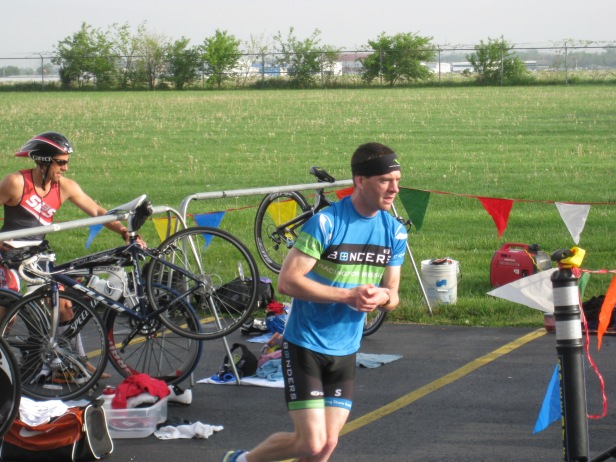 I started out on the run slightly behind the teenager, who had passed me in transition. I caught him before too long, and we ran together the entire run. Since he started close to me in the swim, we pretty much did the entire race together. It turns out he was a track and field athlete.The course was up a hill for about a mile, down a hill for a half mile, and then return. I got up to speed ok, and shook off the cycling legs. My diaphragm was cramping by about halfway, but felt good at about 2 miles. At about halfway, the teenager, who ran track, told me that he was feeling pretty good and was going to speed up, I said, yeah, go for it. He sped up, and interestingly, I stayed right behind him. It’s nice to have someone to chase, I guess. So we ended up running together most of the rest of the way back. As we got within a half mile he said that since I had started behind him in the swim, he wanted to run ahead. I said, yeah, go for it. I knew if I stayed relatively close to him, I could catch him at the end. So I tried to stay close, and as we got close, I sped it up, and then maxed out the last 100m. I passed him right before the time mats, and as I went by, he was like, “Aw man!” Good times. 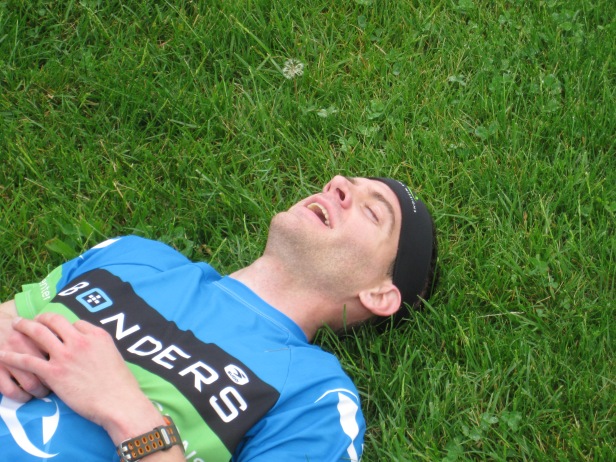 I finished the race and just dropped down on the grass. I had my eyes scrunched shut and was trying to let my lungs catch up with me. People asked me if I was OK, and I told them I was fine, just to give me a minute. I never saw who took my timing chip and gave me my medal.

Afterwards I asked my two spectator friends if any of them were interested in trying a triathlon now after watching one. One had caught the bug and said that he wanted to do the race next year.

My former coach won the race.  He had the fastest run, fastest bike, and 2nd fastest run.  He beat the next guy by six minutes.

It was a lot of fun, and I’m looking forward to my next races!  Hopefully times will drop and age group placings will improve.  Thanks for reading!