I recently managed to get talked into another triathlon this year.  I was swimming with my masters group and several of the University of Dayton students were promoting the UD Triathlon.  I had signed off from triathlons for the year mentally after the last one.  I really wasn’t planning any more (of course, this is besides a couple centuries and maybe a few other running races).  But I kicked the idea idea out to some friends, and the word I got back from everybody was, “Why not?”  (By the way, never ask a manatee that question.  They find it funny.)

(For the full race report, read it at Beginner Triathlete.)

So here I was getting ready for this triathlon, which turned out to be the same course as the Wednesday Night tri I did.  So there was always the feeling I would get retribution on the course.  Meaning: bike better so that I don’t die on the run.  Noted.

(Worthy of note: by ditching my orthotics, my knees don’t hurt any more, and I was actually able to get some runs in.)

I checked the weather a couple days before the race, and *gasp* the nightly low was going to be in the low 40s.  Others let me know it as well.  “Isn’t it going to be cold out?”  Just a little.  I wasn’t worried about the swim, because I knew the water would stay warm.  I was worried about the transition to the bike, and freezing the first few miles.  So I took some extra long sleeved apparel, and an extra towel in case a full drying off made sense.  On the drive to the race I think the highest the temp registered was 49*.

The Race Start: They broke people into four groups: collegiate men and women, and then men and women. The crowds looked a little sparse.  I think a lot of people stayed home because of the weather.  Certainly a few from the masters group did. 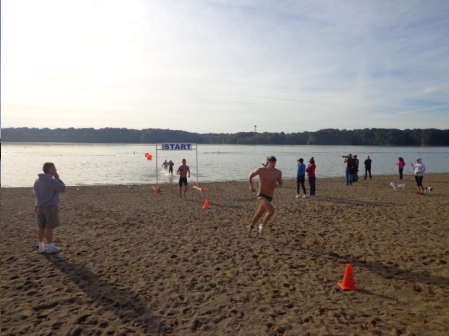 Note: these two pictures aren’t me, but some of the first collegiate racers getting out of the water. 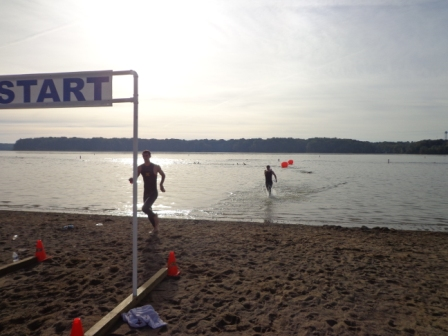 Swim: The swim was actually quite fine.  The water was nice and warm.  However, the first half of the swim I had a hard time settling in mentally.  I’m still not used to open water swims.  I had to take about three short flip-on-back breaks.  Then for the second half it hit me that the sooner I finished, the sooner I finished.  After that I swam fine. 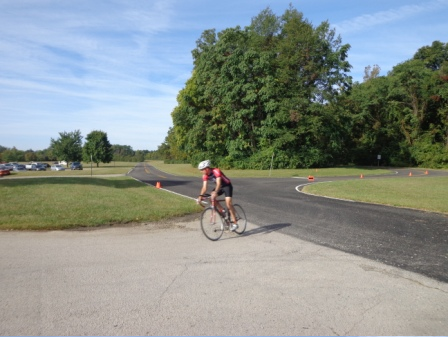 This is a collegiate cyclist coming in off the bike course and heading into transition.

Bike: The bike went much better than the last time I did this course.  This time I knew there were going to be hills, and I did a better job of handling them.  I did the gearing better, and the energy output management better.  I also didn’t drop a water bottle.  I finished with a slightly faster bike time, but having used a lot less energy. 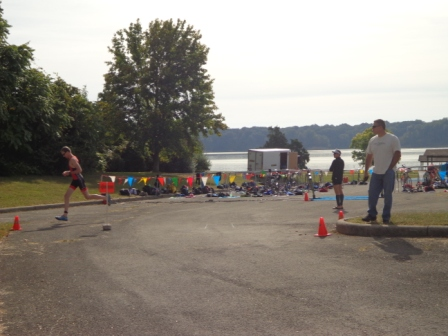 A collegiate runner heading out of transition onto the two loop run course.

Run: The run was WAAAY better this time.  I got off the bike feeling like I could run, and I could tell in the first quarter mile that it was going to go well.  I did the first mile in roughly 8:00, and I knew I was going to get faster.  I left behind a couple guys I had been riding with.  I ended up with a 7:04/mi pace overall, so I did pretty well after the first mile.

Coming into the second lap, I knew that if I kept a certain runner from gaining any distance on me, I’d catch him in the last half mile or so as I sped it up.  With about a quarter mile to go I was amping it up, and breezed by another runner the other guy had passed.  If you look back up at the bike picture, and see the bend coming out of the trees, I started sprinting there, which was more or less 100m to go, to see if I could catch the one runner before the finnish.  I caught up to him fairly quickly, but the path went to a one-laned sidewalk to cross a ditch.  I caught him just as he made it to the side walk.  I had to take a few steps down into the ditch to get around him, but I managed to complete the pass with about 10m to go.  full.out.sprinting.  It got some cheers from the crowd at the finish. 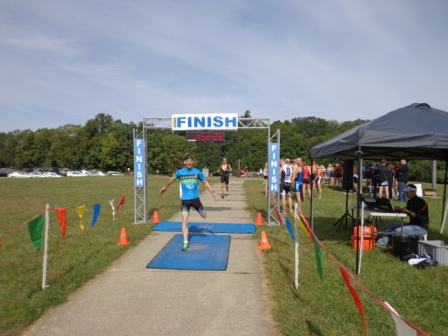 Here I am at the finish!  You can see the guy I passed behind me.

Overall: I took about seven minutes off my PR for the course.  I’m really happy with the bike and run, and I’m glad I decided to do one more race this year.  The temperature was actually pretty awesome for the bike and run.  I’m looking forward to doing this course a number of times next year.

One thought on “University of Dayton Triathlon Race Report”